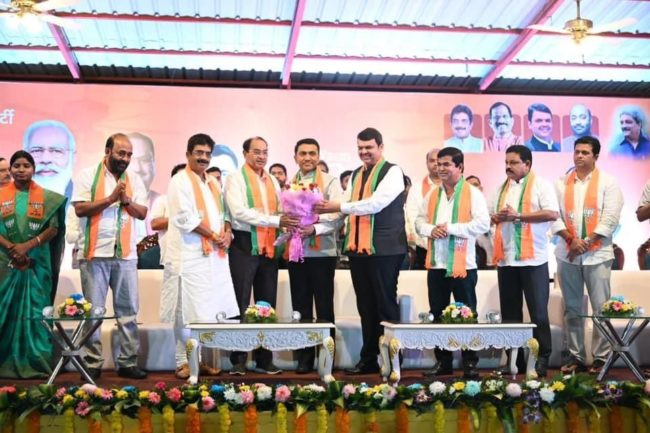 PONDA: The BJP made an effort to forge an alliance with like-minded MGP to contest the 2022 Assembly Election; however, as it saw MGP going away and forming an alliance with TMC, the rattled BJP cursed the MGP calling it an unholy alliance.
The BJP said that Goans would only curse MGP for falling into the monetary trap of TMC.
BJP that has so far targetted to win 22 plus seats, has now given a new slogan of 27 seats in 2022 assembly election with the joining of Bahujan Leader Ravi Naik.
After Ravi, the BJP desk in-charge Devendra Fadnavis hopes that senior Rane will join the BJP.
He said that Congress would reduce to two MLAs and would be called a cycle party.
BJP desk in-charge Devendra Fadnavis launched a scathing attack on MGP for making an alliance with TMC.
He said MGP Lion is just trapped into the purse of the West Bengal Party, but it will get the curse of people.
“MGP Lions will get nothing from the unholy alliance. MGP is attracted to TMC only for the money,” he said.
Fadnavis said after Deputy CM Babu Kavlekar left Congress, it turned into a small party like the nano car wherein only four can travel.
“…and now after joining Ravi, it turned into Auto Rickshaw where only three can sit. Soon with the blessing of Senior Rane, the Congress party would soon reduce two MLAs and then be called a Cycle Party with two riders,” he said.
He said Congress party condition is such that it can’t even decide Party President for three years except for Gandhi family members.
Party President Sadanand Tanavade also said MGP joined TMC with the hope of getting funds for election, and it is an unholy alliance.
Chief Minister Pramod Sawant said that after joining Bahujan leader Ravi Naik, BJP has become strong. He said all the opposition is uniting and forming an alliance to keep BJP from power.
He said Goans should be alert from TMC and MGP alliance.
“MGP has forged an alliance with a party that is committing atrocities on other party workers after winning the election. In Goa, people from all religions live like brothers and sisters,” he said.
BJP leaders praised Ravi for the work he has carried out for Bahujan, especially tenant/ mundkars.
With the joining of Ravi, the BJP hopes of blooming lotus in all four constituencies of Ponda taluka.

Goemkarponn desk
Ponda: The Marcaim BJP block held a press briefing criticising MGP MLA Sudin Dhavlikar, challenging him to show his development works.
They also criticised the MGP alliance with TMC as unholy and urged voters to join BJP.
After the entry of Bahujan leader Ravi Naik into BJP, the lotus is sure to bloom in all four constituencies of Ponda Taluka. Marcaim Block vice President Sagar Mulvi, Sudesh Bhingi, Santosh Ramanthkar, Vinod Pokle, and other briefed media.