RGP all set to play ball in 2022 assembly elections 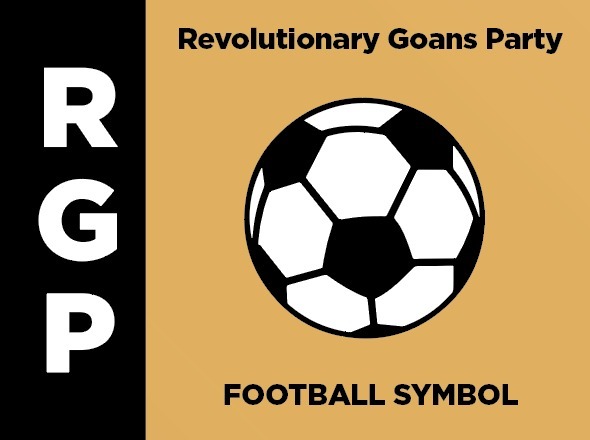 Goemkarponn desk
PANAJI: Revolutionary Goans leader Manoj Parab on Friday formally declared that the burgeoning, youthful party would be contesting the upcoming elections on its own party’s name and symbol that was recently allocated to it by the Election Commission of India.
Announcing the decision at a press conference, Parab said the group arrived at a decision owing to multiple factors, including the Election Commission’s delays in allocating a symbol to the Goa Su-raj Party that they had initially announced they were aligning with.
“So we are declaring that in the 2022 elections, the GRP will fight with the football symbol. Let there be a clear message, clear direction, clear clarity of thought,” Parab said.
The Revolutionary Goans had applied for registration as a political party back in February last year but the lengthy time consuming process involved in registering a political party meant that it wasn’t until December that their political party was formally registered and allocated the football symbol by the Election Commission of India.
Meanwhile, on November 14, Revolutionary Goans leader Manoj Parab announced that they were activating plan B and that they would be contesting in collaboration with the Goa Su-raj Party that was being willingly gifted to them the Goa Su-raj Party leaders Floriano Lobo and others.
However, the process of reapplying for a symbol of the Goa Su-raj party too has taken time and the party is yet to be given a symbol after two symbol suggestions were rejected by the Election Commission of India so far.
“When our candidates used to go door to door campaigning they faced several questions over the party’s registration, symbol status and whether we were serious contenders in the upcoming elections. Since the registration process was taking time, we had decided to go along with the Goa Su-raj party,” Parab said.
“We thank the Goa Su-Raj party for being with us. After discussing the matter with Florian Lobo, he gave us the green signal and his blessings to contest on our own party and symbol,” Parab.
“Now that we have our own party registered and our symbol finalized we spoke to Floriano Lobo, of the Goa Su-raj who has given us his blessings to contest under the banner of our own party and our own symbol,” he added.
The party has already announced that it will contest in all 40 seats and has declared candidates for more than half the seats and has begun campaigning in those seats.