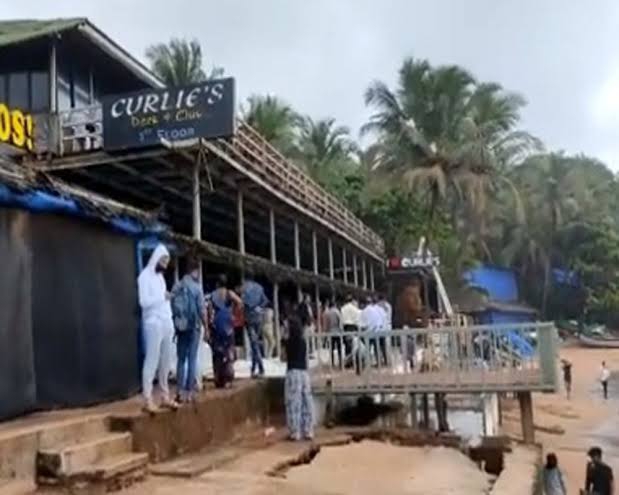 PANAJI: The Supreme Court bench comprising Justices AS Bopanna and Hima Kohli has set aside an order passed by the National Green Tribunal (NGT) to demolish Goa’s iconic Curlies Beach Restaurant’s buildings.
The restaurant owner Linet Nunes had approached the Court challenging the demolition action started by the Goa Coastal Zone Management Authority over violations of the CRZ regulations.
The Bench noted that the Goa Coastal Zone Management Authority (GCZMA), which had initially called for the demolition of Curlies, was not present on the day the order was passed by the NGT.
Additional Solicitor General of India KM Nataraj argued that the absence of GCZMA was immaterial as the order of the NGT was favouring it.
However, Senior Advocate Huzefa Ahmadi, appearing for the restaurant owner, argued that the absence of GCZMA affected the appellant prejudicially, as the appellant was deprived of an opportunity to clarify certain factual aspects so as to enable the NGT to take an informed decision.
Meanwhile, a portion of the restaurant on the first floor and half of the restaurant on the ground floor and the toilet in Survey No 42/10 had been secured following the Supreme Court order.
The labourers carried out the demolition manually as earthmoving machinery could not reach the site because of no proper access.
Curlies co-owner Edwin Nunes is presently cooling his heels in Hyderabad jail over illicit drug cases.
The Curlies restaurant was in limelight after a BJP leader was brought dead to the St Anthony’s Hospital at Anjuna in the wee hours of August 23 after she spent the previous night at Curlies’ beach shack, a beachfront nightclub, where she was allegedly drugged with methamphetamine (MDMA) by Sudhir Sangwan and Sukhwinder, the two persons who accompanied her to the club.