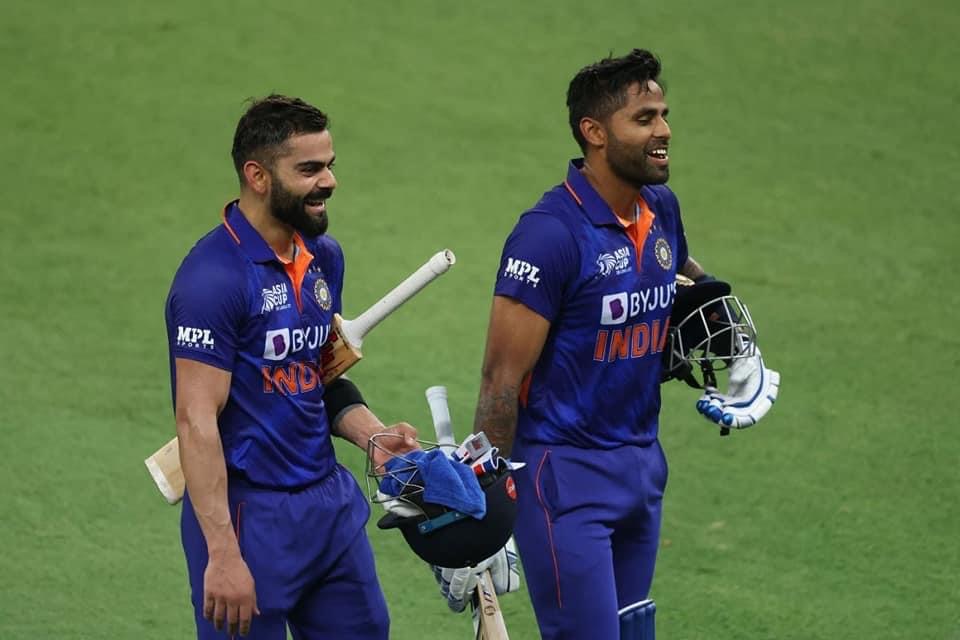 Suryakumar Yadav took the cricket world by storm with a fiery knock of 68 runs in just 26 balls, in the Group A match of Asia Cup 2022 against Hong Kong on Wednesday. The 31-year-old came out to bat at no. 4 for the Men In Blue and struck a total of six big hits and six fours to remain unbeaten on 68 while batting at a stellar strike rate of 261.54. Four out of his tally of six sixes came in the final over of India’s batting innings, which took the team’s total to 192/2.
While India stood at 166/2 after 19 overs, Suryakumar found himself facing Hong Kong pacer Haroon Arshad in the final over. He started off the over with three consecutive sixes, and hit another maximum in the fifth ball, before finishing the over with a double. Meanwhile, Virat Kohli, standing at the non-striker’s end, was left in awe of his teammate’s innings.
As the players made their walk back to the pavillion after the conclusion of the first innings, the live broadcast showed Kohli bowing down to Suryakumar Yadav. The official broadcaster of the Asia Cup 2022 in India, Star Sports India, shared a video of Kohli’s gesture on Twitter, which quickly became a hit among fans. The players were then spotted hugging it outSuryakumar deservingly received the Player of the Match award for his sensational innings and shared his thoughts about the effort. Speaking in the post-match presentation, the 31-year-old revealed some of his shots were predetermined because of the T20 format. He further added that he had planned to take the tempo of the game up and fully express himself. Batting together for a third wicket stand, Kohli and Suryakumar added 98 runs in 42 balls to India’s total in the first innings. The former India captain also remained unbeaten after scoring 59 runs in 44 balls at a strike rate of 134.09. His knock included one four and three sixes. Earlier in the innings, KL Rahul and captain Rohit Sharma hit 36 and 21 runs respectively for India.

In the second innings of the match, India restricted Hong Kong to 152/5 in 20 overs and claimed a victory by 40 runs. India topped the Group A points table of Asia Cup 2022 with the win and advanced into the Super 4 stage, which begins on September 3. India is eyeing to win their record eighth Asia Cup title in the 2022 edition of the showpiece event.