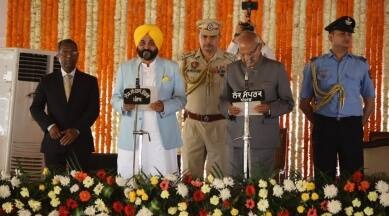 PANAJI: Aam Aadmi Party’s Goa unit congratulated the newly sworn-in State Govt of Punjab led by Chief Minister Bhagwant Mann, calling it a historic occasion.
“The AAP has vowed to fulfil the dreams of two of our greatest leaders, Shaheed Bhagat Singh and Babasaheb Ambedkar. The swearing-in took place at Khatkar Kalan, the native village of Shaheed Bhagat Singh”, said State Convenor Rahul Mhambre, speaking on behalf of the State Executive Committee.
Capt Venzy Viegas and Engr Cruz Silva, who were sworn in as Members of the Legislative Assembly yesterday, also placed their congratulations on record.
“Sardar Bhagwant Mann fought a spirited campaign and overwhelmingly won the people’s confidence. We are confident that the new Govt will work to fulfil all its promises to the people and further strengthen the Kejriwal model of governance”, Engr Cruz Silva stated.
“We are looking forward to AAP’s honest governance in Punjab. Our party’s Govt in Delhi has been restrained due to the curtailment of powers in the nation’s capital, yet we performed beyond all expectations, setting new governance standards in areas such as education, healthcare, electricity, water etc. But with a full state like Punjab, we are excited to demonstrate the entire AAP model, which will surely inspire and give a vision to the rest of the country”, Capt Venzy said.
Vice-President Surel Tilve stated that lakhs of people attended the event today.
“It was a sea of yellow turbans and dupattas, as “basanti” was the favourite colour of Bhagat Singh. We are proud to note that the new CM has declared that no photos of CM or other politicians will be displayed in Govt offices, and only the photos of Babasaheb Ambedkar and Shaheed Bhagat will be allowed”, Tilve informed.