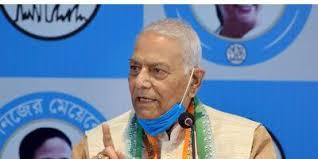 A day after giving his personal assurance that all the three schemes announced by Goa TMC are not only doable but will be implemented as soon as TMC forms the Government in Goa, today TMC Vice-President and former Finance Minister Shri Yashwant Sinha ripped apart the BJP Government both at the Centre as well as the State for not fulfilling its promises and fooling the public. Goa TMC Youth President Shri Jayesh Shetgaonkar and Goa TMC Mahila Wing Vice-President Smt Pratibha Borkar were also part of the press conference that took place in the party office in Panaji.

Shri Yashwant Sinha started off by highlighting how the BJP government had failed Indians on several fronts, be it economy, agriculture, employment or industries. He said, ‘People are of the opinion that the BJP is nothing but a ‘Jumla’ party. Their only aim has been to remain in power by peddling false promises and fake news.’

Stating hard facts and figures, Shri Yashwant Sinha slammed the BJP with a pointed question, ‘The BJP had promised in 2016 that they would double farmers’ income by 2022. What happened to this ‘Jumla’? Further, reminding people about demonetisation, he said, ‘Modi spoke about demonetisation in Goa. What happened to getting all the black money back in 30 days? Did that happen? No! Instead, 99% of the notes came back to the RBI. It seems like demonetisation was meant to convert black money into white.’

Elaborating the failures of the Modi led Government, the former Finance Minister said, ‘Neither can we trust the Central Government, nor the data released by Central agencies, or the BJP. I request the people of Goa not to vote for the BJP as they are only good at jumlas (false promises).’

When questioned about the alleged post-poll violence in Bengal, Shri Yashwant categorically mentioned, ‘The moment BJP realises that they will lose a particular election, they begin spreading false propaganda. In fact, when they fail to get political mileage out of Hindu-Muslim, they drag in Pakistan. I bow my head in shame that in the upcoming U.P and Goa elections, Pakistan is the key poll issue.’ Speaking of Bengal, Shri Yashwant also mentioned how the Prime Minister had disrespected his post with the ‘Didi-O-Didi’ remark.

Shri Yashwant Sinha also made a strong observation on the Election Commission and said, ‘It seems like the COVID norms declared by the EC are for all political parties except the BJP. EC is so flexible as far as BJP is concerned that for them, they will even pardon 100 murders.’

When asked as to why he himself had quit the BJP after being associated with the party for decades, the veteran leader said, ‘The party’s fabric is no longer what it was at the time of AB Vajpayee. Look at what’s happening around you. Despite being one of the tallest leaders of the party, Rajnath Singh has been completely side-lined in Uttar Pradesh. Modi and Shah want to run the party all by themselves.’