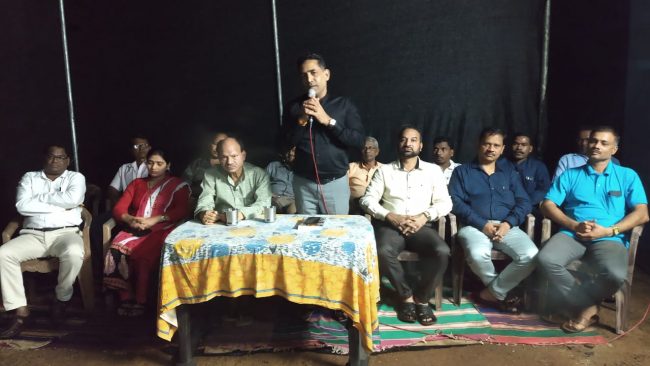 CANACONA: Speakers at United Tribal Associations Alliance (UTAA) meeting in Canacona hit out at the ST community leadership within the government for playing politics and undermining the community’s uprising.
The community said it will not rest till justice is done in every sphere of governance.
An awareness meeting was held at Yedda in Cotigao given the postponement of the celebration of World Tribal Day (9th July), in which UTAA president Prakash Velip, besides Arts and Culture Minister Govind Gawade, Durgadas Gawade, ZP(Poinguinim) Shobhana Velip, Gomant Gaud Maratha president Vishwas Gaude and other community leaders spoke on the injustice being done to the community in various spheres.
Prakash Velip, without naming anyone, however, openly hit out at the community leaders within the government for playing hidden politics even to the extent of allotting the Tribal Welfare portfolio to the community member within the cabinet, in a virtual reference to Minister Govind Gawade.
Speaking further, Velip said, ‘ come 2027 elections, after having met our demands for ST reservation, there should be an ST Chief Minister in Goa. Stating UTAA is the backbone of the ST community, no one should unnecessarily try to pull down the legs of ST leaders or try to spoil the image of leaders affiliated with UTAA, and even if the said force belongs to ST Community will not be tolerated at any cost’.
“Unfortunately, some leaders belonging to the community are pulling the legs of our own leaders, and the classic example is inspite of having a well-versed and capable minister in the ST community in the cabinet, the Tribal Welfare ministry is not given to him. And for this, more than the government, our own ST leadership within the government is responsible, and unfortunately, the same force is trying to put division in the togetherness of the ST community. Due to this crab mentality of some of our own ST leaders, our community is still lagging behind”, said Gomant Gaud Maratha president Vishwas Gaude.
UTAA secretary Dr Uday Gaonkar said, ‘ST community has never got anything without agitations or compelling authorities to provide justice, henceforth it would be necessary to make some the St leaderships to understand the history of the community.
Also spoken on occasion were Durgadas Gawade, Arjun Gaonkar, and Anand Gaonkar gave the vote of thanks while Daya Gaonkar compeered the awareness meeting.

Cuncolim - As it appeared that the Congress High Command could pacify the internal bickering & put to rest the ego clashes within senior leaders, ... Read More

NEWER POSTLandslide at Vaddem damages house
OLDER POSTBJP govt got an escape route from being exposed in Assembly: Congress