Utpal Parrikar resigns from BJP; to contest as independent candidate 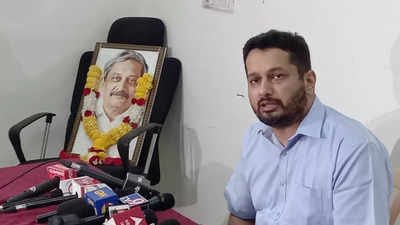 PANAJI: Utpal Parrikar, son of former Chief Minister late Manohar Parrikar today announced that he will be contesting the upcoming Goa Assembly election from Panjim constituency as an Independent candidate.

“Manohar Parrikar contested from Panaji for two decades. He developed a bond with Panaji and I too have made that bond. I am fighting for values,” said Utpal

He also said that resignation was a formality but the BJP will “always remain in my heart. It is a difficult choice for me, I am doing it for the people of Goa. No one should be worried about my political future, people of Goa will do it, he said

“I tried to convince my party that I can contest. Inspite of that, I didn’t get candidature. I had only two options – BJP or going independent. I have chosen to contest as an independent candidate.”

Utpal Parrikar did not feature in the list of 34 candidates for the Goa Assembly elections the BJP released on January 20.

Utpal Parrikar said he will not contest from the two other constituencies offered as alternatives by the BJP.

He said he will consider standing as an independent or look at the other parties to contest from Panaji.