Vasco underground cabling to be completed by March: Sudin 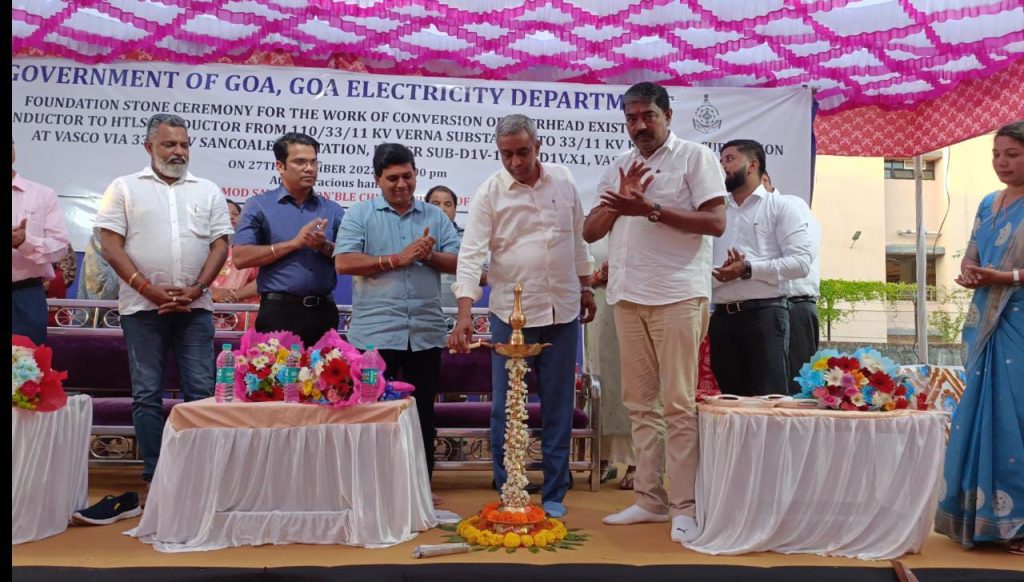 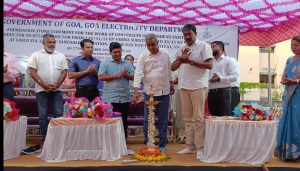 Goemkarponn desk
VASCO: Power Minister Sudin Dhavalikar said that much-awaited works on the underground cabling in Vasco and Mormugao constituency will be completed soon, even as early as March.
Dhavalikar was speaking to reporters after attending a ceremony of laying the foundation stone for the conversion work of the overhead existing ACSR panther conductor to HTLS conductor from 110/33/11 KV Verna substation to 33/11 KV Kadamba substation at Vasco via 33/11KV Sancoale substation, under Sub-Div-II (R), Div-XI, Vasco in the presence of Vasco MLA Krishna Salkar, Mormugao MLA Sankalp Amonkar, chief electrical engineer Stephen Fernandes, superintendent engineer circle-I (S) Rajiv Samant, executive engineer Div XI Vasco Pradip Naik and other electricity department officials.
Dhavalikar, later speaking to reporters, added that the project was taken up at the cost of around Rs 56 crores and would be completed within six months.
“The state government has given priority to each and every constituency for conversion work of overhead existing ACSR panther conductor to HTLS conductors. Our target is to provide uninterrupted power supply till 2050 by installing and arranging such works all over the state”, said Dhavalikar.
Dhavalikar, however, announced to re-launch of the OTS scheme for the benefit of electricity consumers from January 29, 2023.
“I appeal to the municipal councillors to come forward and help the people to avail OTS scheme, giving facility to their doorsteps. After taking over charge of this portfolio, the department has generated revenue of around Rs 759 crores in the state’s coffer. Regarding the dilapidated streetlights dilapidated conditions, there are nearly 4.5 lakh streetlight poles all over the state which will be given immediate attention,” said Dhavalikar
Vasco MLA Krishna Salkar said that the works on underground cabling have been pending for a very long time.
“We faced a lot of issues, but with Dhavalikar taking over the power department, we have started to see some positive development across Goa. This project worth Rs 50 crores will ease Vasco’s power situation. This is a plan to offer uninterrupted power for the next 20 years minimum, and we are very glad that he has announced that the dream of Vascokars to have underground cabling will be completed by March, and this will be a new Years gift for Vasco,” said Salkar.
Mormugao MLA Sankalp Amonkar said that the project would benefit the entire Mormugao Taluka.
“We have seen how the power consumption has increased over the years, and this project will help us get double the power, and the works on the first underground cabling will be completed in three months and the second phase in six to eight months,” he said
Amonkar also thanked the CM, Dr Pramod Sawant, for having sanctioned this project.
“We have seen how this electricity department gets maximum criticism from people when there are power cuts, but we have to also see how this department has been striving to resolve the issues of power, which mostly affects the common man in Goa,” said Amonkar.