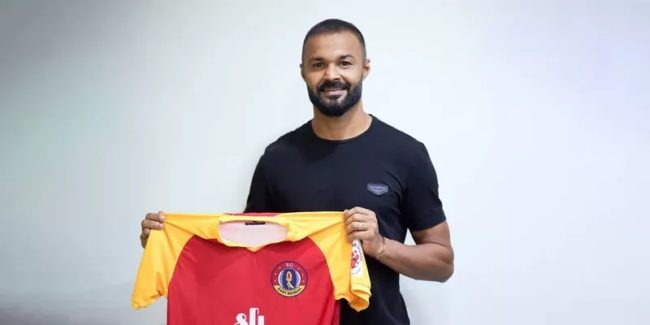 Goemkarponn desk
PANAJI: Veteran goalkeeper and the golden glove winner in the 2020-21 ISL – Arindam Bhattacharya, signed for SC East Bengal ahead of the new season. The custodian played 23 matches for ATK-Mohun Bagan in the previous season, having kept 10 clean sheets in the tournament, conceding 19 goals overall.
SC East Bengal secured the services of experienced goalkeeper Arindam Bhattacharya on a one-year deal ahead of the 2021-22 Indian Super League season. The footballer won the golden glove award last season, having helped arch-rivals ATK-Mohun Bagan reach the final of the ISL, with 10 clean sheets and 59 saves in 23 matches.
Having played his initial years for Goa-based Churchill Brothers FC, he joined Mohun Bagan in 2012-13, before playing for several clubs across India. The custodian was signed by then-ATK during the 2018-19 ISL and even guided them to a title win the following year. However, with the Kolkata-based side roping in Amrinder Singh this summer, Arindam’s future at the club looked bleak.
“I am glad to be here. I can’t wait for the season to start. I want to win as many games as possible for SC East Bengal, and keeper as many clean sheets as possible. I will also try and keep the dressing room very tight and together. That’s how you win trophies and that’s what I will try to do with this team,” said Arindam Bhattacharya, after signing over the dotted line.
Motivation from East Bengal fans and his family’s loyalty towards the club played influential roles in Arindam signing the contract. The Indian international, who had a save percentage of 72.85% in the previous season, will be working under the supervision of Liverpool legend Robbie Fowler in the upcoming season.
How can @ArindamGK be far behind?🗣️At home, my father and my grandfather are East Bengal supporters. So when the opportunity came along this time, I grabbed it with both hands.#ArindamIsOurs#JoyEastBengal#HeroISLpic.twitter.com/yvW6bnbsbk
— SC East Bengal (@sc_eastbengal) September 6, 2021
“I got a lot of messages, saying ‘dada (elder brother)’ don’t leave Kolkata. To be honest, that motivated me a lot and that is one of the reasons (for me joining East Bengal). At home, my father and my grandfather are East Bengal supporters. I have never played for East Bengal in my entire career spanning 16 years. So when the opportunity came along this time, I grabbed it with both hands,” added the footballer.