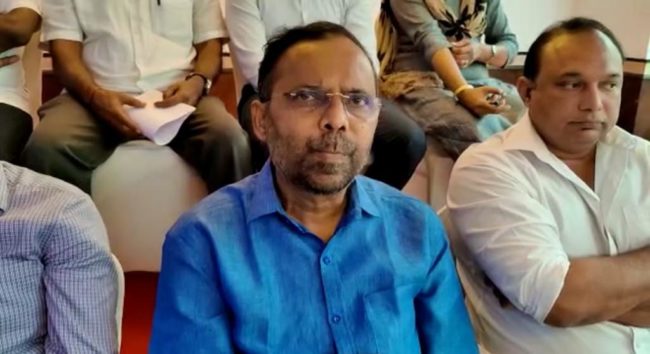 Goemkarponn desk
VASCO: The infighting for the party ticket in the Bharatiya Janata Party (BJP) less than three months of crucial Assembly elections in 2022.
On Saturday, Vasco MLA Carlos Almeida was another leader who threatened to take a harsh decision if he was denied the party ticket.
Almeida was reacting to reports that BJP leader Daji Salkar would be considered for teh party ticket from Vasco.
“BJP must support minority candidates. Right now, around 15 MLA in BJP are from minorities, and I feel to win minority votes, the party has to give at least 35 per cent seats to minority candidates,” Almeida said.
Asked what would he do if denied a party ticket this election, he said he may have to take harsh decisions.
“I will be forced to take harsh steps if injustuce is meted out to me or in the event a ticket is denied,” he said, adding, “Utpal Parrikar has taken major decision even I may have to take such decision.”
He said that already party’s have contacted him, including Prashant Kishor’s I-PAC.
Almeida also complained that the government has always given step-motherly treatment as far as development is concerned.
A total of 9 municipal councllors extended support to Carlos Almeida.
They said they will stand by Carlos Almeida on whichever party he decides to contest.