Exhorbitant water bills received by a residents of Bepakghal Curchorem 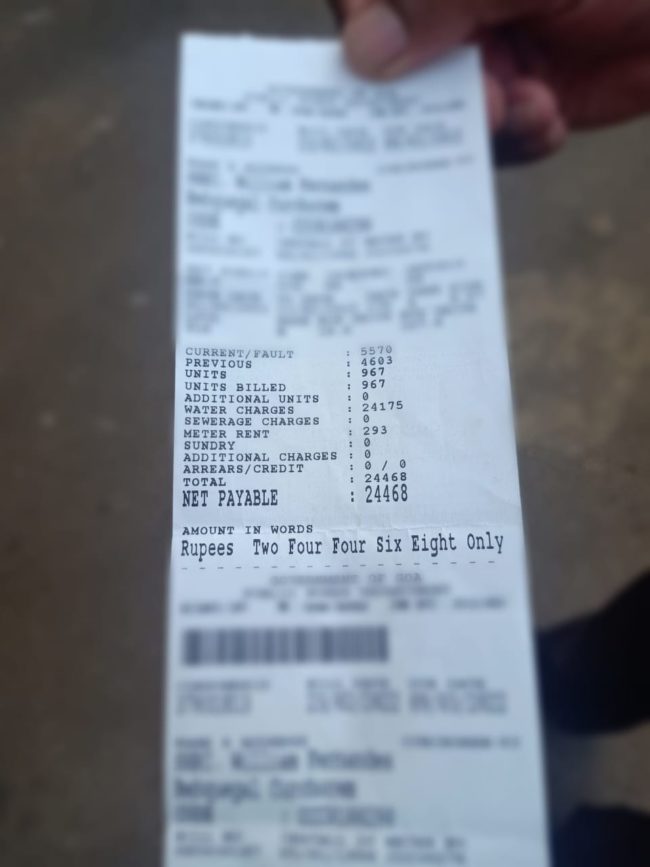 CURCHOREM: Locals of the Curchorem municipal area ​​ have approached the PWD water supply section and have asked why the overall water bill has increased exorbitantly.
Citizens who had lodged a complaint with the PWD water supply section later said that they were called on Thursday by the officers because the assistant engineer of the water supply section was not available in the office on Wednesday.
Amar Naik, who had lodged a complaint with the authorities, said, “We have not received any water bills since the government had drawn up the water scheme six months ago. We have noticed that there is a big difference between the current bills and the previous bills, six months ago.”
We used to get bills between Rs. 500 to 700 but this time we got bill Rs.9,500 that is of six months, and it means per month it is 1,500/- which double than previous.
Naik further said that I would like to ask the government why delaying our bills for six months is? And that’s why the bill has gone up and why the bills weren’t given on time. It looks like the main reason for blocking these bills is the assembly election; that’s why we are suffering because of immaturity and irresponsibility shown by the high authority of the department, said Amar Naik.
“And now it is not affordable to the common man to pay such heavy dues. In the past, the bill was delayed for a month or two, but when the new scheme was launched by the government, they stopped sending bills because they saw something wrong with it,” said Amar Naik, quoting a water supply department official, Naik told that what they said that he did not have a written order in this regard in the department.
Williams Fernandes complained to the PWD Water Supply Office today that he had received a six-month bill of Rs 24,000 and told reporters that when we gave the complaint, they had no answer to our complaints and that department had nothing in writing.
The bill we have got is about six thousand rupees a month. A responsible office and officials should answer it as soon as possible.
He further added that the government was saying that the government would provide free water to us, adding that if we look at the water bill, it almost doubled, and these changes and problems are faced by the people today. This whole scenario’s responsibility is of higher authorities, and people should get their answers on this hike in water bill, Fernandes said.

Goemakrponn desk PANAJI: The office of the Collector /Chairman of District Disaster Management Authority, North Goa District, has appealed to the people of State of ... Read More

Margao Police detected a burglary case in which several motors from a showroom at Goa 's commercial capital were stolen.   Three burglars from Margao, ... Read More

Pernem Police have continued thier raids against drugs activities in Pernem. As per PI Jivba Dalvi reliable information was received regarding one Austrian National involved ... Read More