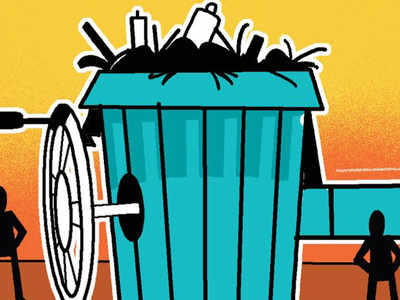 Goemkarponn desk
PONDA: Kavlem Gramsabha held on Sunday under Chairmanship of Sarpanch Rajesh Kavlekar turned stormy over garbage management issue.
Heated discussions prevailed on the issue between Panchmembers and locals as the locals opposed the proposed composting unit near Panchayat Office, citing it is in a residential area, which causes an unbearable stench
The locals said they will not allow dumping the garbage collected from the entire area at the Panchayat office, and the need arises, then they will approach court. Yogesh Kavlekar, Sudeep Naik, Sandeep Naik, and many others took part in the discussion.
Sarpanch Rajesh Kavlekar replied said that Panchayat does not have land on its own, and therefore it has no alternative but to dispose of garbage near the Panchayat office by setting up a garbage composting unit.
He said as per Court directives, Panchayat has to set up its own garbage composting unit.
He stated that until the problem is solved on a permanent basis, the Compost unit will be set up near the Panchayat area.
He asked people to cooperate with Panchayat, and if anyone provided land, Panchayat was ready to shift its composting unit.
Deepak Shikerkar showed a willingness to provide his one thousand square meters of the plot at Dhangarwada.
However, Sarpanch said since this area is located in a hilly area and has no access to the vehicle, the garbage compost unit is not feasible