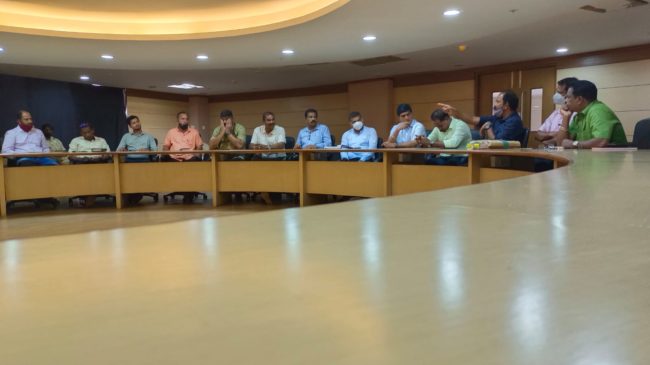 VASCO: Inter-departmental joint meeting was called to discuss and decide on the pre-monsoon works on Thursday at Ravindra Bhavan, Baina.
Vasco MLA Salkar called the meeting to discourage mosquito breeding and avoid Dengue, Malaria cases in the Mormugao municipal area.
The special joint meeting was held in which multiple government department officers remained present, including Electricity, PWD, Fire and emergency services, Mormugao Municipality, Police, etc. This meeting was called to clear the doubts and to assign the works related to pre-monsoon works.
The meeting lasted for almost two hours. There was an elaborate discussion on waterlogging, flooding, sewerage release in a nullah, trimming of tree branches posing a danger to commuters, desilting of drains, etc.
Speaking to the media, Vasco MLA Krishna Daji Salkar said that he had called this meeting to clear the doubts and to assign various works to the officers about pre-monsoon works.
We aim to avoid flooding in the municipal area, and for that, desilting of nullahs drains etc., will be done by putting additional labours if need be.
He further said that MMC has put up a proposal to purchase six trucks, an earthmover and other required machinery, which he will again discuss with the Urban Development minister shortly.
Salkar further urged all councillors to work unitedly and get themselves involved in the public works and help the public in their ward.
When questioned about his steps to avoid Dengue and other vector-borne diseases outbreak in the municipal area, Salkar replied that he discussed this issue with the Urban Health centre’s health officer. The Health Officer told him that they are taking all measures to create awareness and discourage mosquito breeding. Salkar said that fumigation, spraying, fogging will be done wherever needed, but people should also co-operate and follow all safety measures.

Goemkarponn desk Margao: The work of improvement to Colva Creek and construction of retaining wall at Colva beach was inaugurated at the hands of Benaulim ... Read More