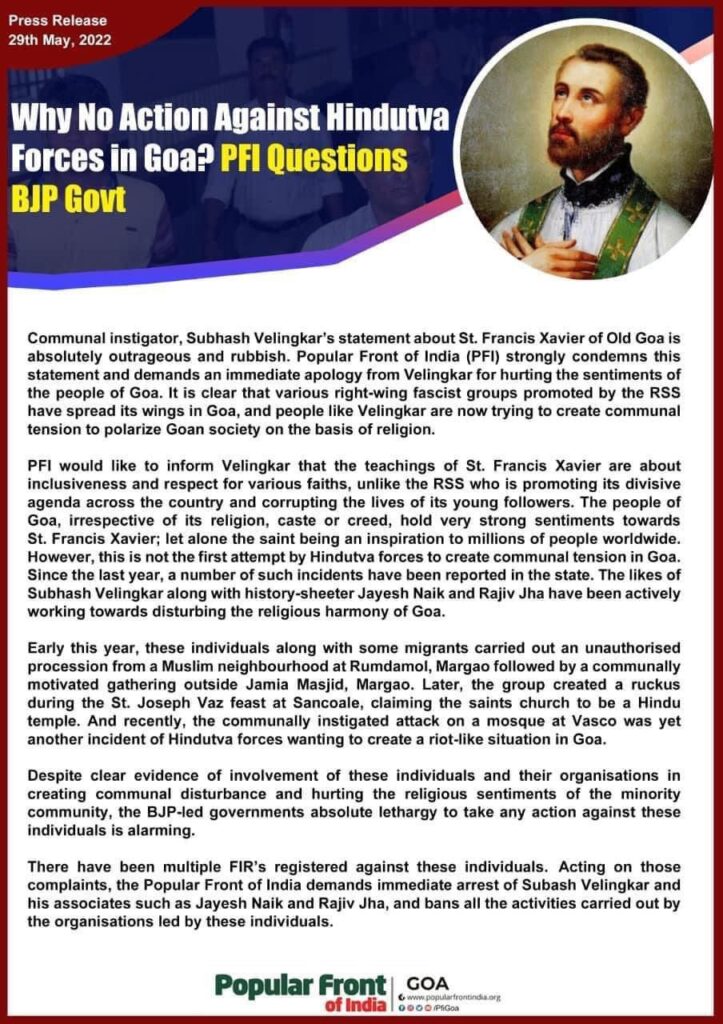 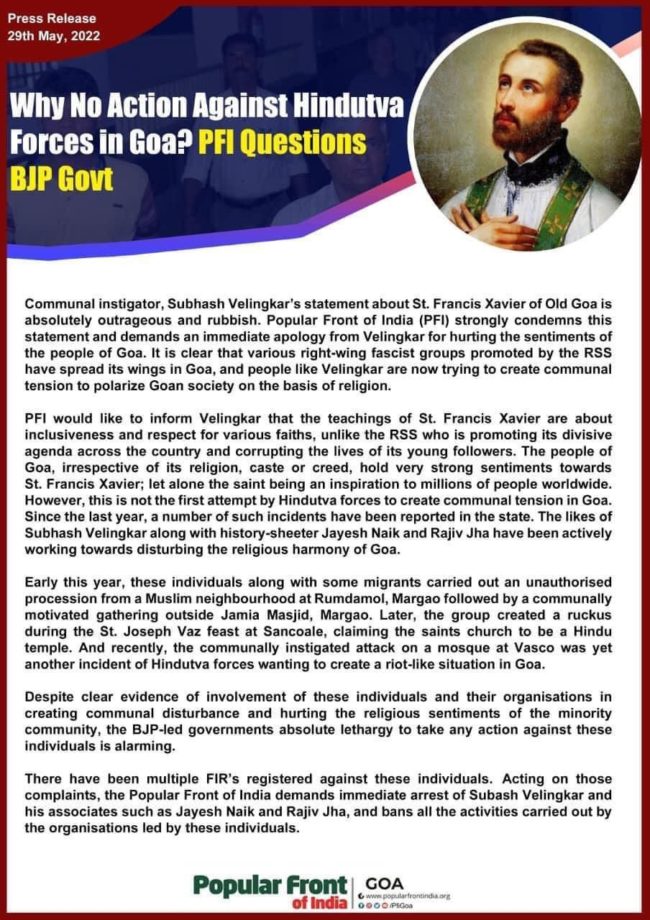 PANAJI: The Progressive Front of India bas call for action against Subhash Velingkar’s statement about St. Francis Xavier of Old Goa is outrageous and rubbish.
Popular Front of India (PFI) strongly condemns this statement and demands an immediate apology from Velingkar for hurting the sentiments of the people of Goa. Various right-wing fascist groups promoted by the RSS have spread their wings in Goa. People like Velingkar are now trying to create communal tension to polarize Goan society based on religion.
PFI said it would like to inform Velingkar that the teachings of St. Francis Xavier are about
inclusiveness and respect for various faiths, unlike the RSS, which is promoting its divisive
agenda across the country and corrupting the lives of its young followers. The people of
Goa, irrespective of its religion, caste, or creed, holds powerful sentiments towards
“St. Francis Xavier, let alone the saint is an inspiration to millions worldwide.
However, this is not the first attempt by Hindutva forces to create communal tension in Goa,” PFI says.
Since the last year, several such incidents have been reported in the state. The likes of
Subhash Velingkar, along with history-sheeter Jayesh Naik and Rajiv Jha, has been actively
working towards disturbing the religious harmony of Goa, PFI charged.
“Early this year, these individuals, along with some migrants, carried out an unauthorized
procession from a Muslim neighborhood at Rumdamol, Margao, followed by a communally
motivated gathering outside Jamia Masjid, Margao. Later, the group created a stir
during the St. Joseph Vaz feast at Sancoale, claiming the saint’s church to be a Hindu
temple. And recently, the communally instigated attack on a mosque at Vasco was yet
another incident of Hindutva forces wanting to create a riot-like situation in Goa,” PFI says
Despite clear evidence of the involvement of these individuals and their organizations in
creating a communal disturbance and hurting the religious sentiments of the minority
community, the BJP-led government’s absolute lethargy to take any action against these
individuals is alarming.
“There have been multiple FIRs registered against these individuals. Acting on those
complaints, the Popular Front of India demands immediate arrest of Subash Velingkar and
his associates, such as Jayesh Naik and Rajiv Jha, and bans all the activities carried out by
the organizations led by these individuals,” they said.