Land major issue in setting up MRF in panchayats: Mauvin 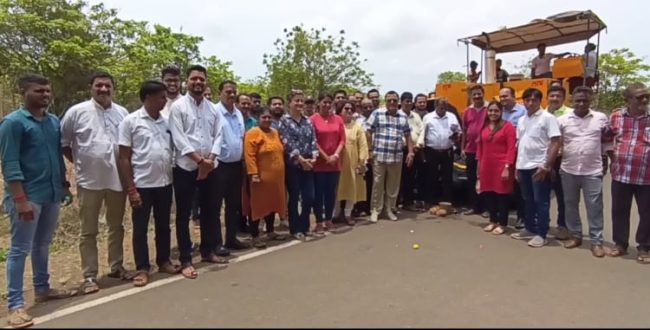 VASCO: Availability of land becomes a significant issue in setting up a Material Recovery Facility in most Panchayats. MRF in each panchayat is necessary, says Panchayat Minister.
During the road tarrying inaugural ceremony in the Chicalim area, Panchayat Minister Mauvin Godinho upheld having a functional Material Recovery Facility (MRF) in every panchayat. Stating further, Godinho also pointed out the harsh reality that most of the panchayats find it challenging to identify the piece of land to set up an MRF facility to segregate waste.
The minister further said that out of fear of court order, the panchayats tend to show some land that neither belongs to the panchayat nor the private party, Commudades, etc., agrees to give it to the panchayats to set up the MRF facility.
“It is easier to say that all the formalities need to be done, but at the same time, I will also have to understand their problems, so I have given them some more time. In due course of time, every panchayat should fall in line. Most of the panchayats are on their way to having their MRF facility,” he said.
Further, when asked about the Verna garbage treatment plant, he said that such cleaning greening Goa plants should come up as it is the need of the hour. Major waste treatment plants such as Cacora, Saligao, Verna, etc., will clean the waste. Nobody wants a garbage treatment plant, but everyone cleans their surroundings and dumps their waste in other person areas, and the same suit follows further. This should not happen,” he added